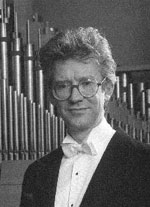 Since his solo debut at the Royal Festival Hall in 1979, Graham Barber has maintained a position as one of Britain’s leading concert organists. Born in London in 1948, he studied organ with Brian Runnett, Nicolas Kynaston and Gillian Weir. His first commercial recording was made at the Royal Northern College of Music in 1975, when The Sunday Times described him as ‘a technically brilliant, musically mature organist’. He has made many subsequent recordings both in English cathedrals (Coventry, Norwich, Salisbury, Hereford, Ripon and Truro) and in German and Dutch cathedrals and churches (Altenberg, Ingolstadt, Osnabrück, Limburg, Villingen and Leeuwarden), and was described in Gramophone magazine as ‘one of the organ world’s finest recording artists’.

Graham Barber has played in most major venues in Britain, as well as in Europe and the Far East. He has given concerts at Braga Cathedral, Portugal, the Bath International Festival, the Smetana Hall in Prague, St Michael’s Church, Leipzig, and Leeds Town Hall.

Graham Barber is Professor of Performance Studies at the University of Leeds, Visiting Tutor in Organ Studies at the Royal Northern College of Music, Manchester, and Organist at St Bartholomew’s Church, Armley. He has lectured and given masterclasses at the Hochschule für Musik ‘Franz Liszt’, Weimar; the Conservatorium Saxion Hogeschool Enschede, and the Hochschule für Musik, Köln.